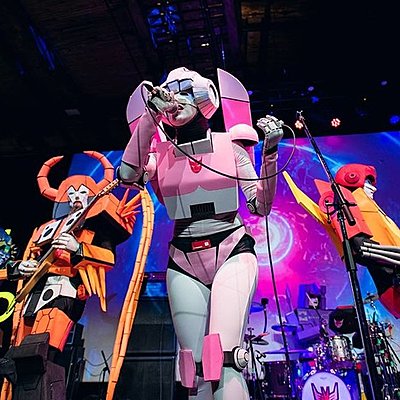 The Party ‘Til We Break Tour

We like to keep up with the latest and greatest when it comes to cosplaying, soundtrack cover bands. The Cybertronic Spree is clearly the most important thing in that burgeoning field.
There was once a time when a toy would become a cartoon, and that cartoon would become a movie. Back in the 80s, that sort of movie wouldn’t cost over 100 million dollars to make or stir concerns over racially insensitive robots. It would just be a feature-length cartoon orgy of lasers and action figures duking it out in the name of good, evil to the sounds of epic arena rock. They dependently featured riff flailing soundtracks, and relentlessly uplifting themes. Now, while films based on toys have become the Michael Bay-made blockbusters to beat, somehow they’ve lost sight of what some true fans believe is the best part. In other words: where the heck are all the power ballads?

Enter The Cybertronic Spree, the inevitable hybrid between a cover band and the enthusiasm of Comicon cosplayers. Taking the stage as Hot Rod, Arcee, Rumble, a Quintesson, Spike in a yellow construction helmet, and Unicron’s head, the boxy, brightly costumed six-piece belt out numbers from The Transformers The Movie: Original Motion Picture Soundtrack dressed as Transformers themselves. It’s the most notable resurrection of Stan Bush’s “The Touch” since Boogie Nights.

Their first show was at a FanExpo afterparty, and I caught them this month during another nerd-centric occasion, the launch party for Bit Bazaar, an indie video game winter market, where they blew up several Instagrams of Canadian geeks—especially when comic book artist Steve Manale popped up as Weird Al for the encore, “Dare to be Stupid.” The Cybertronic Spree is a fandemic ready to hit the nerdy world.