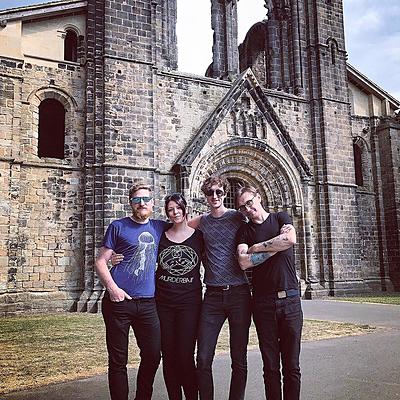 An awesome evening to celebrate Prids reissuing their first two albums on vinyl!

Spotify tracks from The Prids

​Do I Look Like I’m In Love?, the new full-length from The Prids, illustrates the Portland dark pop band’s mettle through keen lyrical observations, but also in its attention to sonic detail and song craft—this record couldn’t have been made by any other band at any other time. “Do I Look Like I’m In Love?” and “The Shape” both swirl and build like dreams filled with grey skies and the flickering faces of past friends and lovers. These songs nudge up against the air-brushed punk of “Lie Here” and the bass-driven “Colliding,” which recalls the dazed jangle of early R.E.M. More than two decades in, The Prids have made the best and most cohesive album of their career.
The fact that there’s even a new Prids record is a miracle. In March of 2015 bassist-vocalist Mistina La Fave suffered a brain hemorrhage the night before the band was scheduled to enter the studio. The recovery was physically and mentally taxing, and La Fave is lucky to be alive, let alone playing and performing again. The Prids’ 22 years have been marked with death, sickness, divorce, and a near-fatal van crash that cut a tour short and left members bloody and broken—but they survive through the friendship and bond of founding members La Fave and guitarist-vocalist David Frederickson. While those events have invariably made their way into the band’s narrative, the two simply chalk it up to life.
​They met in La Fave’s small hometown of Saint Joseph, Missouri, in 1995, not long after Frederickson had moved there from Southern California. They started a relationship (they divorced in 2001, not long after they married), formed The Prids, and moved to Lincoln, Nebraska, before settling in Portland, Oregon, in 1999. In that time they’ve released four full-lengths and a trail of EPs, toured all over the world, while gaining the respect of bands throughout Portland for their tenacity and longevity (The Prids are one of the longest-running active bands in the city). They continue to make music for the right reasons—with or without a label, for themselves. A few years ago they brought in drummer Gordon Nickel and multi-instrumentalist Tim Yates, their sturdiest lineup to date. These four individuals are what make Do I Look Like I’m In Love? such a special record.
​Throughout it all The Prids have remained completely DIY (the band even launched its own label/artist collective This-a-Way Records in 1996). Their videos and album art are as brilliantly conceived as the music itself. And in 2017 the Prids are playing with the same ardor they did 20 years ago. They say what doesn’t kill you makes you stronger, and this band is the embodiment of that.

Born in the fall of 2016, Lost Echoes unites four Portland, Oregon-based musicians in a sonic collective dedicated to creating songs that blend the dark, hypnotic grooves of post-punk titans Joy Division and The Cure with the blissful aural barrage of shoegaze pioneers My Bloody Valentine and Slowdive.

Earlier that year – nearly two decades removed from playing in shoegaze-inspired bands including Skiptracer and RF Programme – singer, songwriter and guitarist David Alexander Gross found himself drawn once again to a sound that had always captivated him. Energized to start a new project, he reached out to drummer Justin Knauer and bassist Joel Cox, two friends from the techno scene who were also fellow producers and DJs. They were soon joined by guitarist Michael Lynch, formerly of the dream pop outfit Visiting Diplomats. Together, the band began writing the songs that would appear on their first EP, No Tomorrow. Released in early 2018, the recording displayed the key elements of their sound: heavy, swirling, reverb-drenched guitars; dynamic, pulsating grooves and dramatic vocals.

The group further honed their sound on the three expansive tracks featured on The Things We Said EP, released a few months later. With thicker, more textured guitars, sinewy bass lines, powerful drumming and more assured vocals, The Things We Said is the sound of a band gelling into a single, powerful unit.

The group entered the studio again in early 2019 to record the All My Heart EP. Released in mid April to coincide with the group’s performance at the 4th annual Seattle Seagaze Festival, the three muscular, ethereal tracks reveal yet another side of the group. All My Heart is the first release on the Portland-based DIY collective This-a-Way Records, which features a roster of talented PNW artists championed by label founders Prids.

In May 2019 the Lost Echoes took another step in its continual evolution when Brian Wilcher, formerly of Southern California-based shoegaze/dream pop duo Paris Ohio, replaced Cox on bass guitar. The band are currently focused on writing new material for a mid-2020 release.

“The Things We Said reveals an epic, unmistakable sound.”