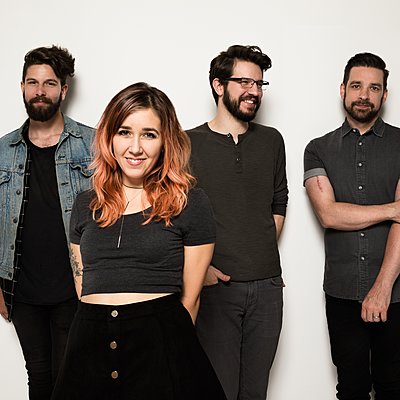 Tiny Stills is a power pop band from Los Angeles influenced by Courtney Barnett, That Dog, and 90s/00s rock. Their first album, Falling is like Flying was released in 2014 and was a direct response to the isolation and anxiety that comes from life changing events after front-person and founding member Kailynn West was held up at gunpoint. Born from a desire to make something that felt and sounded nothing like the she felt at the time- happy. Since then, West has been the nucleus of the project with a rotating cast of band members, but most recent lineup includes Harry Foster, Zach Comtois, and Tony Thaxton.

After a last minute lineup change left an opening on a national tour with Bayside’s Anthony Raneri and A.W. in 2015, West stepped in at the last minute to complete the tour as Tiny Stills. She sold thank you cards with download links as last minute merchandise and after selling out of physical copies of the first record; the project hit the ground running. The band’s highly anticipated second album Laughing Into the Void out 6/1/18 is full of tattoo-worthy lyrics, brutal honesty, crunchy guitars and catchy melodies that help you remember that even the worst days have a silver lining- at least you’re not alone. 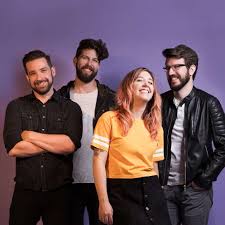 There are plenty of songs that have pointed out the irony of telling people you’re feeling “good”, “okay”, or “great,” even when you’re not. Few view it through the filter of social media as eloquently as Tiny Stills’ new single “Everything’s Going Great” from the band’s upcoming split EP with Odd Robot. The track breaks down the superficial facade of holding it all together with bombastic charm in the Instagram-worthy video, premiering today on Atwood Magazine.

In the song’s prechorus, frontwoman Kailynn West offers a reason as to why we lie to those around us, and by proxy, ourselves about how we feel: “I don’t want the world to think I’m weak.” West tells Atwood:

“It’s hard to find truth in the stories we tell ourselves to just get through hard times. We’ll tell ourselves and our family and friends that we’re doing ok just so we can get through the day, but believing that can delay finding solutions. Eventually it all catches up to you.”

Spotify tracks from Bristol To Memory

Bristol To Memory is an American rock band based in Southern California. The band's music combines elements of indie, alternative rock and pop punk. First formed in 2005, their name originates from the cross streets in Santa Ana where front man Rory O’Connell, brother/bassist, Kealan O’Connell and their childhood friend/drummer, Alex Buster, grew up. Rounded out by Daniel Wonacott (former guitarist for Finch) Bristol To Memory is now stronger than ever. Their musical compositions and collaboration evoke a feeling of nostalgic excitement with their dynamic guitar progression, thrilling choruses, and poetic lyrics.

Touring the United States, Canada and most recently Mexico, Bristol To Memory has performed on noteworthy stages such as the Van’s Warped Tour, SXSW Music Festival, House Of Blues, The Roxy, and The Whiskey. Bristol To Memory’s music has already been licensed for several national television networks such as MTV, The Oxygen Channel, and Fox Sports West with the Los Angeles Angels Baseball Club. Recently nominated as OC Weekly 2019 Best New Band, Bristol To Memory has gained a reputation of one of the foremost up and coming bands in Southern California. With five solid EPs of material already under their belt, Bristol To Memory recently released their first full-length album Wake Up on Wiretap Records.