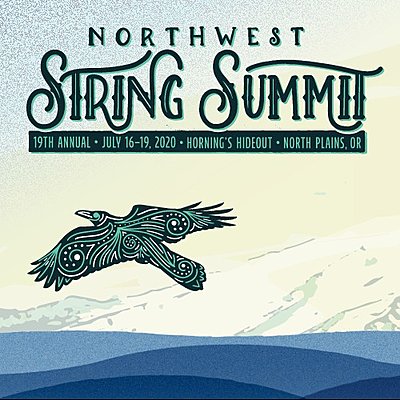 Northwest String Summit (NWSS) celebrates its 19th Annual event this summer as it returns to Horning's Hideout (North Plains, OR) as the Pacific Northwest's largest Americana and String Music camping festival in the Pacific Northwest with the finest acoustic pickers and standout electric bands from July 16 - 19, 2020. Located just 20 miles outside of Portland, OR, Horning's Hideout stands as one of the most scenic festival sites in the country providing unmatched camping options under the old growth fir forests of the Tualatin Hills in the northern Willamette Valley; NWSS is the only music offering this year taking place at Horning's Hideout.  One of the Pacific Northwest's most family-friendly and locally-sourced festival, NWSS caps its capacity at 5000 attendees to ensure an intimate experience for all festival-goers at an incredible ticket price. The Northwest String Summit hosts over 40 bands on  5 stages with 80+ hours of near contiguous music, yoga and mediation offerings beginning early in the morning, running throughout the day and well into the night. There is something for everyone, all the time!          Due to the overwhelming popularity of our late night shows, full production sets (including light shows) at the Cascadia Stage and Kinfolk Revival Tent will commence simultaneously right after the Main Stage shows featuring additional sets by headlining acts. Our Kid's Area will feature exclusive kids and family oriented workshops, kid's oriented music, arts/crafts, and activities all day long. At the Cascadia Stage, new food and beverage offerings will complement the standout up-and-coming talent beginning in the morning and running well into the night.  Also located  at the Cascadia Villiage, the wildly successful Troubadour Lounge Stage, a singer-songwriter focused intimate performances daily , as well as late night music running concurrent with the other stages around the grounds.Northwest String Summit partners with singular Portland organizations, food vendors and emerging Pacific Northwest-based musicians as a way to support the various thriving local communities. 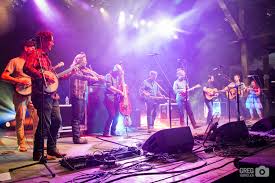 Before we get to the specifics of this year’s Northwest String Summit, I’d like to give you a chance, if you’d like, to give some thoughts on the passing of Jeff Austin. Although he hasn’t been a member of Yonder Mountain String Band for several years, many Kinfolk have been deeply affected by the news of his death.

It is tragic. Benny “Burle” Galloway said to me recently that “when you’re that kind of brilliant you have a tendency to burn bright and hot, and sometimes fast.” That pretty much sums it up. YMSB was (and is) a pioneer of this music. Their early sound and tunes along with Jeff’s infectious energy and quirkiness drew us in and endeared us to them, creating the Kinfolk scene that persists. This community has blossomed and expanded to become a huge scene including bands that have catapulted beyond what was imaginable. The Kinfolk community is what it’s all about and Jeff leaves us that as part of his legacy. Many of my current best friends (including my wife) I met in this Kinfolk community….it is family in so many ways and will certainly keep on going… 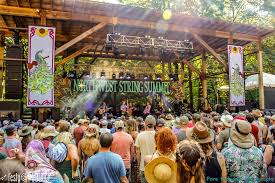 If you make the trek out there, you will be welcomed by the sounds of free-range peacocks roaming the grounds. This enchanted, lovely grove of trees and sprawling spread-out land is called Horning’s Hideout.

It is owned and operated by a man that goes by the name of Bob Horning. It first opened its doors to the public back in 1983. At that time, you could rent a horse and spend the day horseback riding through the lush green forest, as well as try your hand at fishing in the public trout pond. It is open to the public from 8am to 8pm for most of the year.

But twice a year, this place comes alive. For the last 18 years, Horning’s Hideout has become a place where memories are made and where the Kinfolk reunite. If you are a fan of traditional bluegrass, jamgrass, blues, and or funk, you might have already heard of Northwest String Summit.

My first year out at this amazing venue was 20 years ago. A friend of mine that helped construct the Main Stage ended up inviting me to a small little gathering that was called Summer Hummer. If I remember right, at that time Bob was charging $25 per carload of people. Local bands like The Buds of May and Big Island Shindig were just a few of the opening acts.

My 16-year-old self instantly fell in love with the music, the arts, and the community. It was the first time in my life that I had witnessed what unconditional love looked like in a group setting.

Like a fish that took the bait, I was hooked. I made a promise to myself that I would never miss a year. The following year my high school sweetheart and I attended the 2nd annual Summer Hummer. With an attendance of no more than 350 people, the main bowl/amphitheater was a free-for-all hootenanny with a ton of room to cut a rug and dance a jig.