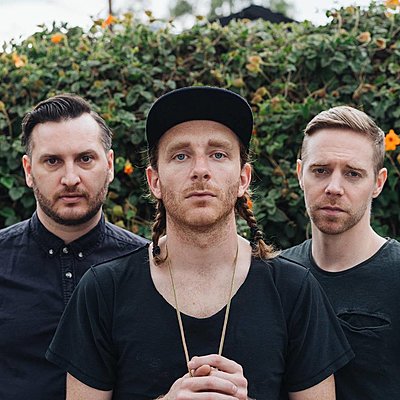 In an age where Instagram and YouTube clips dominate the ways in which fans consume music, Bear Hands have reached for something more traditional. With their third album You'll Pay for This, they've crafted a record that holds the listener in its grip from start to finish. Attention spans maybe shrinking, but Bear Hands have overcome distraction and completed a truly coherent album, further developing their sound without losing one iota of edge. Growing up doesn't mean growing old; it means getting smarter!

You'll Pay for This was recorded in a Westchester, NY home and a Brooklyn studio. It was co-produced by guitarist Ted Feldman and long time Bear Hands collaborator James Brown (Foo Fighters, Arctic Monkeys) and mixed by Alan Moulder (Smashing Pumpkins, Nine Inch Nails, Foals). The album is full of layers and synths, but it still feels organic. You can feel the pulse of kinetic energy surging through each note, riff, chord, and melody.

"Our band has been the same four guys for all nine years," said Feldman, nodding to songwriting partner and singer Dylan Rau and Bear Hands' impeccably solid rhythm section, bassist Val Loper and drummer TJ Orscher. "We've witnessed all the classic music industry cliché journeys play out our periphery - bands blowing up to stardom, bands crippling under the spotlight, crippling under no spotlight, bands tossed off by labels or the press… but we've somehow been able to keep a relatively steady hand."

You'll Pay for This is a potent mix of sticky 70's songwriting, CBGB's and Factory Records era post-punk guitars, and the high drive of modern pop and hip hop. It's like a flawlessly executed genre unto itself. The music is intense, relentless, and totally dreamy. However, the lyrics maintain a snarky playfulness that keeps things grounded. As Feldman astutely noted, "We take our work seriously but what's life without a sense of humor?"

Rau concurred, "As we get older, we have more fun winking than pouring our hearts out. We spent our early 20s in New York going out many, many nights. Finally, the fear of missing out is subsiding and we're realizing that being happy with yourself is more important."

The road to that happiness (and the band's origins, actually) can be traced back to their first album Burning Bush Supper Club, released to critical praise in 2010, but it was their second album, 2014's Distraction, that truly introduced Bear Hands to the world. They enjoyed healthy radio airplay, notching a Top 10 hit with "Giants" and a Top 20 single with "Agora," the latter of which they performed on Conan, marking their late night TV debut. Feldman recalls that experience as a bit surreal after witnessing the Batmobile being refueled while waiting to play. Bear Hands also built an impressive live resume, touring with acts as diverse as Cage the Elephant, Killer Mike and Passion Pit, as well as securing slots on all of the "can't miss" festivals like Coachella, Lollapalooza, Reading & Leeds, Outside Lands, Life Is Beautiful and Made in America's Philadelphia edition.

But Bear Hands are hardly just another indie rock band from Brooklyn plugging away.

With You'll Pay For This, Bear Hands actually had an endgame and a strategy. "It was the first time we could afford to focus and write a record," Feldman said. "All the music we made prior to this record was created in between jobs, touring, and life stuff. It was kinda cobbled together. On this one, we actually had the time specifically to make it. And we knew that what we made was going to be released, and there was going to be an audience for it. So that was a really different atmosphere to start with."

Rau agreed, saying, "The band now feels like something that is not going to go away and it feels like it's permanent."

That meant heightened expectations, further drive, and new responsibilities with the creation of their own record label, Spensive Sounds. Bear Hands became less a passion project and more a viable career path. The members attempted to adjust accordingly before finding their groove.

It took a minute. But it was worth it.

Feldman first approached this album with a 9-to-5 mentality. "I did that for a couple months," he admitted. "It didn't work out. I got depressed. I wasn't completing much. I didn't know how to use time that way. It was Brooklyn, winter, and I was in a window-less room. It wasn't the vibe."

Rau noted his own songwriting brutal truths, saying, "The first verses and choruses are easy. The hard part is finessing a song. There is a lot of detail work and editing. That's not sexy. Like John Lennon said, 'The second verse separates the men from the boys.'"

In order to get to those all-too-important "second verses," Feldman and Rau, who've been songwriting partners since their days at Wesleyan University, extended a tour stop in California and holed up in a mountain cabin east of L.A for three days. The duo did nothing but write, and it was the turning point. Rau, who confessed that he usually writes music on guitar while watching TV, relished the lack of WiFi and the ability to narrow his focus. As a result, the concentrated, 72-hour sessions were extremely productive.

The first single "2AM" is a groove-heavy burner, written collectively over time. Less of an "a-ha" moment, it revealed itself when it was ready. In the chorus, Rau laments "Nothing good happens past 2AM." Sonically, it's perfectly suited for one of those personal apocalypse climax scenes in an indie flick. Lyrically, it is indicative of the band's evolving mentality.

"There are themes of aging and changing. Maybe we've had our fair share of ugly nights," Feldman said. "It's a parenting cliché, but maybe it's true?"

Then there is "Boss," which starts out whimsically before launching into a torrent of angular riffs and the semi-snarled one-liner "I'm the bitch and you're the boss." Meanwhile, "Too Young" features a riff written in a car driving through Belgium, and imagines the future of a precarious relationship. "Purpose Filled Life" is a song that Rau penned while alone in his railroad apartment in Brooklyn. "I had to sing in falsetto the whole time, since I didn't want anyone to hear me next door," he recalled. "We weren't making money, I barely had a job, and it was a scary time. People were leaning on me to become more stable and I hoped the song would be like a self-fulfilling prophecy." The singer also nodded to "I Won't Pay," which has many unique parts and "an explosion at the end… since everyone likes explosions." #Truth.

You'll Pay for This is a sonic document of a band growing and moving into the next phase of its career and of young men graduating to the next phase of their lives. And it has a simmering intensity coursing through its veins. In effect, the album is like "the second verse." It will be what separates Bear Hands from their peers.